Home Inspection Inform you if the following hazards are visually present mould, asbestos, vermin and cockroaches. Contact us for a free inspection quote.

There are over 100,000 mould species, some being more harmful than others. Most homeowners have the impression that mould is nothing more than a mere nuisance. Mould invades homes all over the country and most people can handle low-level exposure, but the problem with mould is that it multiplies when it has access to moisture and organic material like food, soil, wood paper, leaves and fabric. That once annoying household mould could be making you and your family sick.

Attics – dark places that hold moisture – are popular places for mould to grow. Common attic mould has the potential to aggravate individuals who are allergic to mould. These people may break out in rashes, experience cold-like symptoms such as coughing or a runny nose, and may experience respiratory problems. Check attics often to prevent and detect mould growth.

The term “toxic mould” is somewhat misleading. House mould in itself is not toxic, but they do produce toxins that that are harmful to person’s health. Toxic mould exposure can lead to diseases that are mild in some cases but fatal in others. How a person’s body reacts to toxic mould exposure depends on the strength of their immune system. People with a weak immune system are the ones most easily compromised. There are three types of black mould that are less common but are considered very serious health hazards. Toxic mould such as: Stachybotrys, Acremonium, and Memnoniella require soaked cellulose (wood, paper, and cotton products) to grow. Such moulds may appear slimy when wet – with white edges.

Even if the mould growing in your home is not toxic, it will still stain, discolour, and deteriorate the surface it is growing on.

Symptoms of mould allergy may include – sneezing, runny nose, coughing, wheezing, teary and redness of the eyes, and skin irritation or rash. Asthma attacks may be caused by mould or mould spores in people who have asthma and are allergic to mould. Even in some non-allergic individuals, mould can irritate the eyes, skin, and airways. In some cases, people may develop sever reactions to mould exposure. Symptoms of severe reactions include fever and difficulty breathing. People with compromised immune systems or those with chronic lung diseases can develop serious infections of the lungs due to moulds.

It is not possible to predict the severity of the health risks associated with mould in the home. Allergic individuals vary in their degree of susceptibility to mould and the risk may also depend upon the extent and exact type of mould present. 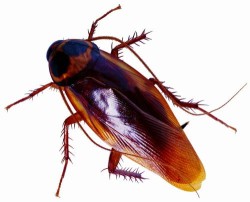 Cockroaches present an array of health issues. They are carriers of many different diseases and can trigger asthma attacks in people who suffer from the breathing disorder. People prone to allergies are also affected by the presence of cockroaches.

When most people think of allergy “triggers” they often focus on plant pollens, dust, animals, and stinging insects. In fact, cockroaches also can trigger allergies and asthma.People with cockroach allergies develop acute asthma attacks. The attacks occur after inhaling cockroach allergens and last for hours.

Cockroach allergen is believed to derive from faces, saliva, and the bodies of these insects. Cockroaches live all over the world, from tropical areas to the coldest spots on earth.Studies show that a high percentage of urban homes have cockroaches.Private homes also harbour them, especially if the home is well insulated. When one cockroach is seen, it is safe to assume that there are many more hidden under the kitchen sink, in closets and the like. Once they are in the home, they are hard to get rid of.

Asbestos fibres break down with age, break free from the material, and become airborne. This release can happen naturally as the material ages, where the material is damaged or when disturbed during DIY renovation. This is the moment they become hazardous to your health as you breathe in these fibres, which become trapped in your lungs. Materials that contain may not be a risk to your health if the condition is good, if the material is not damaged in anyway or situated where damage can occur easily.

The body cannot break down asbestos. With the exposure to high levels, this increases the severity of the negative health effects. If you have worked in the building trade or have had regular contact with asbestos materials and products over a period of time, then you will be at a higher risk of developing illness.

Asbestos is medically known to cause a variety of diseases such as lung cancer, mesotheloima, pleural plaque, and asbestosis. After exposure to asbestos, symptoms and negative health effects may not be experienced until years or even decades later.

Some Examples Of The Use Of Asbestos Are:

Soffit Boards, roof tiles and sheeting, wall panels, guttering and drain pipes. Asbestos content ranges from 10% to 40%. Weather conditions will affect the level of fibers released into the air.

Receive regular updates on the home inspection and property industry straight to you inbox.